Screenvision Media, in partnership with Gunpowder & Sky, today announced a one night only screening event in dozens of U.S. cities for McLaren, the captivating story of Bruce McLaren, the legendary racing champion, designer, engineer and founder of the iconic supercar that bears his name. Theater information and tickets can be found at https://www.mclarenfilmusa.com with additional locations added daily.

The name McLaren is synonymous with motor racing excellence, and stands today as a symbol for automotive superiority. Yet what is less known is the brand’s origins. McLaren recounts the New Zealander’s life, from his humble beginnings at his father’s auto shop in Auckland, to revolutionizing Formula One racing by becoming the youngest driver ever to win a Grand Prix, to his death at 32. Featuring interviews from his closest friends and family members, the documentary is an unprecedented window into the life of a true genius.

“Auto enthusiasts across the country have been eagerly awaiting the release of McLaren, and we’re so pleased to be pairing up with Gunpowder & Sky to bring this documentary to the big screen this summer,” said Bernadette McCabe, SVP, Business Strategy, Screenvision Media. “With lots of original racing footage and interviews, this documentary will transport you back in time and leave you feeling both moved and inspired.”

Founder of Auto-Archives William Taylor was honored to attend the US Premiere of ‘McLaren’ in Indianapolis, prior to this years Indy 500 where McLaren F1 driver Fernando Alonso thrilled the crowds and very nearly won! “I sat next to Bruce McLaren’s daughter Amanda for the screening and found the whole experience quite emotional. The movie was captivating and gave me a new perspective on Bruce McLaren. Even though I have written the definitive book on all the McLaren cars, the movie was all about Bruce and I learn’t so much about the man behind the badge. What a hero!”

The Denver screening will be at the Alamo Theatre at Aspen Grove, Littleton on the 17th Aug at 7:00pm 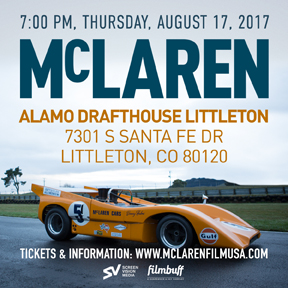